Matt Sailor, CEO
It is one thing to provide a much needed solution, it is quite another to deliver complex technology solutions in a way that even a small business owner can employ with minimum effort and no technical knowledge. Always keeping the end-user in mind, IC Realtech, designer and manufacturer of advanced video surveillance systems and software applications, adds intelligence and analytics to the surveillance technologies already available in the marketplace. IC Realtech creates in-house algorithms to add analytics and intelligence to existing video surveillance solutions. In doing so, IC Realtech makes the video itself much more of a database of events which is searchable, and tells a story entirely of its own. By enabling systems to decipher what is in the video– from object recognition, target movement recognition to facial and weapon analytics, IC Realtech’s products and solutions allow the customers to be to rapidly record, cut and find the data they require.

Keeping the end-user in mind, the company’s products can immerse customers in the online video from any device—mobile phone, tablet, laptop or a desktop. “One of our main drivers of the solution was simplicity,” says Matt Sailor, CEO of IC Realtech. Considering that not all customers are seasoned video or electronics professionals the company built its products on platforms familiar to the users—like Android, iOS, and Windows Mobile.

Sailor, who is particularly proud of the company’s first consumer product— ALLie home, says, “The ALLie home is a dual lens, 360 degree by 360 degree camera that allows you to navigate around the immersive video image without blind spots.” This ‘smart video camera,’ can also stream live Virtual Reality (VR) without any post production. Illustrating ALLie’s VR feature, Sailor explains, “If a customer in CA has my ALLie camera, I could put on a VR Headset and live within his room. So I would actually be with him while he is talking to me.”

IC Realtime’s other product is designed and intended for professional use. The IC720 BEAM is very similar to ALLie, but comes with much higher resolution and is much more robust.

The ALLie home is a dual lens, 360 degree by 360 degree camera that allows you to navigate around the immersive video image without blind spots

The beauty of the camera however lies in the fact that its powered by the Qualcomm A 800 series processor—Snapdragon, and also sports Bluetooth, WiFi, Near Field Communication (NFC) and 4G cellular built directly into the camera. The IC720 BEAM is an intelligent and immersive camera for security applications that can transmit videos across multiple network methods and protocols.

While ALLie and 720 BEAM are the latest releases, IC Realtech has launched several software applications and intelligent cameras addressing the unique challenges faced by the clients. Out of the many strange cases that IC Realtech dealt with, Sailor recalls an instance when the company deployed a surveillance system to protect a large farm that bred extremely expensive animals like llamas. IC Realtech’s security system sent notifications to the trappers whenever a predator entered the field, thus reducing the loss of animals to near zero.

IC My Cloud, IC WiFi Cameras, and IC P2P Networking are some of the security cameras and software solutions by IC Realtech. Having released futuristic products that stay well ahead of the most surveillance technologies, Sailor states that, “IC Realtime will continue to fill the void in marketplace with smart surveillance systems.” Citing the need for surveillance technologies in Middle East, South America and Central America, Sailor is focused on expanding into these markets. “Our mindset is always to be prepared for the future,” adds Sailor. With a bigger facility for manufacturing, R&D and quality control, IC Realtech aims to be the ‘catalyst’ in the future growth of surveillance technology. 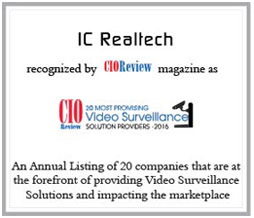